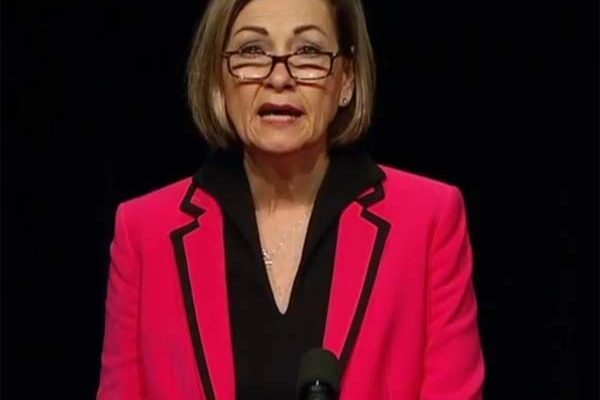 DES MOINES — Governor Kim Reynolds has signed into law a bipartisan plan for awarding grants to companies that expand broadband in Iowa.

“This type of progress is what’s possible when regardless of party affiliation or which chamber legislators are elected to, leaders can come together to achieve common goals that are in the best interests of Iowans,” Reynolds said this morning.

The bill passed the House and Senate unanimously. Most of the companies getting these grants must provide broadband service that has upload and download speeds of 100 megabits per second, although companies planning to extend slower speed internet access to sparsely populated areas could qualify.

“Iowa will be empowered to take full advantage of 21st century technology while competing on a level playing field in a 21st century economy and Iowans shouldn’t settle for anything less,” Reynolds said, “and thanks to this bill, they won’t have to.”

Legislators and the governor have agreed to set aside $100 million in state money for the broadband grants. Reynolds expects to use at least $50 million dollars in federal pandemic relief money to reach the overall $150 million dollar goal she set in January, “opening doors and opportunities for our communities large and small and resulting in one of the most significant broadband build-outs in the entire country.”

During a brief speech before she signed the bill into law, Reynolds called the plan a response to a “glaring need” in the state.

“Iowa currently has the second slowest broadband speed in the country and a third of our counties are broadband deserts,” Reynolds said. “In the 21st century when access to high speed internet is growing increasingly necessary for everyday life — from work to entertainment to health care — we needed to act and I’m proud to tell Iowans we did just that.”

Reynolds signed the bill in the Iowa Capitol rotunda in front of a large group of legislators. She plans to ask the legislature to provide another $150 million in state funds to the broadband grant program in each of the next two years. The program guidelines, outlined in the bill Reynolds signed, require businesses that get the grants to make a matching investment in a broadband project.