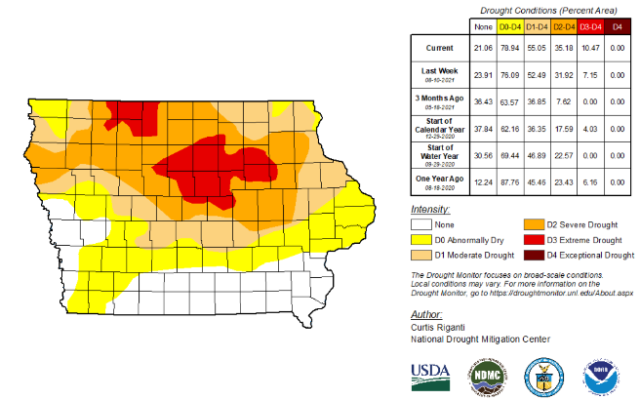 DES MOINES — Despite the rain we saw over the weekend and this morning,  it would take many more rains to make a dent in the long-running — and worsening — drought..

State climatologist Justin Glisan says the new drought maps released late last week show drought conditions widening and getting more severe, especially across Iowa’s northern half. “We’ve had drought expand across the state, especially the D-3 category, which is extreme drought,” Glisan says. “Looking at the previous maps, this is the largest extent that we’ve seen across northern Iowa since the early part of April in 2013.”

The new climate outlook was issued for the region on Thursday and Glisan says it holds no obvious signs for what’s to come in the long-term. “We have an equal chance of above, below or near-average temperature and precipitation behavior in the month of September,” Glisan says. “Then looking at meteorological fall — September, October, November — we do see elevated chances of warmer temperatures but again no clear signal for the precipitation side.”

Fall will arrive in about a month, September 22nd, and Glisan says it’s a toss-up as to what the season ahead may hold. “We do have a pretty good chance of moving back into a La Nina phase of the El Nino southern oscillation which impacts the jetstream over the United States,” Glisan says. “If we look at analog years in which La Nina has returned to the state, we don’t get a clear signal on precipitation behavior.”