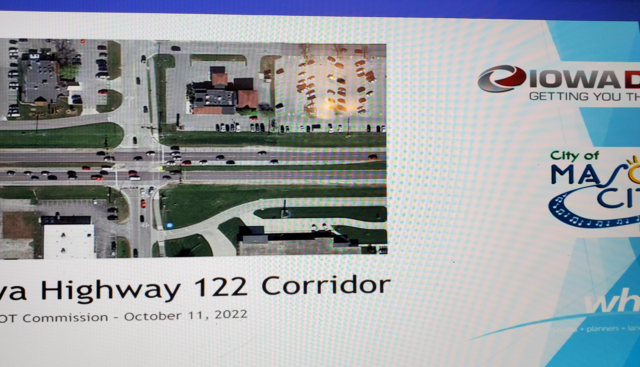 Screenshot of the presentation made to the Iowa Transportation Commission

MASON CITY — The Iowa Transportation Commission heard from Mason City officials this morning about the proposed improvements to State Highway 122 on the city’s west side.

The City Council last month accepted a feasibility study of the highway between the western city limits and Winnebago Way, recommending to the Iowa Department of Transportation a reconstruction of the highway with multi-lane roundabouts at five major intersections instead of traffic signals being used.

City Administrator Aaron Burnett told the commission that the 2.6 mile stretch of road is an important one for the city.  “This is that first impression that so many people get when they come off of I-35 coming into our community. Several businesses along the corridor, including small retail, large commercial, health, personal services, this is one of the most vibrant sections as far as commercial activity in Mason City. If you’ve not been up there, I think every community has this space where it’s strong in attracting business to that area and it’s really important to our community and to the whole region that it functions well.”

Burnett says with the growth in the western part of the community, the highway needs to be reconstructed to better serve that area.  “The reality is as this corridor continues to develop, unfortunately over time it just became less and less functional and now is really the time to start taking a look at how we move forward with this corridor serving the businesses, visitors and residents of Mason City and the whole region.”

Fouad Daoud of WHKS in Mason City says the proposed plan not only looks to solve the traffic flow problems with the roundabouts but also addresses several other issues.   “We feel that by improving the corridor, there are a lot of opportunities. Obviously we’ll add a storm sewer system. We will add a ten-foot trail and a six-foot sidewalk. Also this is an opportunity to narrow the median and create better drainage. We’re also thinking about using aesthetics beautifying the corridor. Maybe include rain gardens to take care of the drainage. We also feel the roundabouts will allow to continue the traffic to be moving with less idling.”

The Transportation Commission heard the presentation during their public input portion of the meeting and no action was taken. A decision by the commission would come at a later date.

You can listen back to Mason City’s presentation to the Transportation Commission via the audio player below.