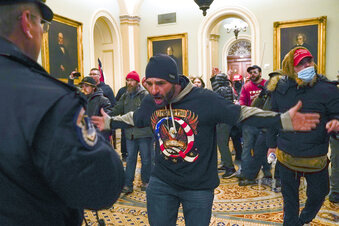 FILE - In this Jan. 6, 2021, photo, Trump supporters, including Douglas Jensen, center, confront U.S. Capitol Police in the hallway outside of the Senate chamber at the Capitol in Washington. The Iowa construction worker and QAnon follower was sentenced Friday, Dec. 16, 2022, to five years in prison for his role in the Jan. 6, 2021, insurrection at the U.S. Capitol, when he led a crowd chasing a police officer who diverted rioters away from lawmakers. (AP Photo/Manuel Balce Ceneta, File)

WASHINGTON (AP) — An Iowa construction worker has been sentenced to five years in prison after being at the center of one of the most harrowing scenes of the Jan. 6, 2021, riot at the U.S. Capitol.

Judge Timothy Kelly on Friday said he wasn’t sure Jensen understood the gravity of what he had done. Jensen was convicted in September of obstructing Congress and assaulting or interfering with police officers.