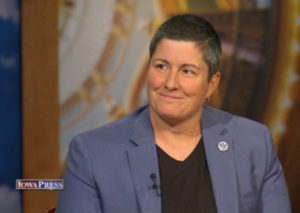 JOHNSTON — The number of Iowa prison inmates who’re caught commuting another crime after they’ve been released from prison has been dropping.

“Recidivism went down last year for the first time in six years,” Iowa Department of Corrections director Beth Skinner said of data from state Fiscal Year 2021. “…Recidivism has gone down another 1.7% this year.”

And that would be for the state’s fiscal year that ended June 30, 2022. At one point, more than four out of 10 people being sent to a state prison had been sentenced to a correctional facility before. It’s fallen to 37%, which Skinner says ranks Iowa among the top 10 states at reducing returns to prison.

“Our staff has worked so hard to do evidence based practices, have fidelity to the work they do. Their commitment, their passion for people to have second chances, knowing they’re going back into their communities — they’ve done a lot of work,” Skinner said. “We’ve had a lot of plates spinning. We’ve executed a lot and that’s why we’re seeing that success.”

More than 600,000 people are released from state prisons in the United States each year. Within three years, two out of three of them are arrested and more than half are incarcerated again.

A small portion of Iowa inmates have been sentenced to spend the rest of their lives in prison, while 95% of the people in an Iowa prison today a release date. Skinner said ensuring a period of parole is a priority.

“There are people that flatten out and when we say flatten out, that means that they leave prison with no time. Is that ideal? No,” Skinner said. “We want people to have time in supervision so they don’t fall through the cracks because…reentry can be challenging. If you imagine yourself being incarcerated five, 10 years and get out, the world has changed…so we want to make sure that they have time to get out and someone catches them and they get the wraparound services to address any kind of mental health issue, or substance abuse issue, or transportation, or jobs.”

Six out of 10 people who enter prison have a substance abuse issue and Skinner says the goal is to ensure those with short sentences go into a treatment program when they’re released. Prison entry evaluations include mental health screening as well and up to 70% of inmates have some sort of mental health diagnosis.

“Then we get them the treatment they need and we try to stabilize them,” Skinner said. “And then, once they get out, we make sure they have medication, they have a prescription, so they don’t fall through the cracks while they’re waiting to see a mental health provider.”

About 30-40% of people sentenced to Iowa prisons do not have a high school diploma. The state prison system has programs that help inmates earn a GED, a college diploma or skilled worker certificate while they’re in prison. Skinner said having a degree dramatically reduces the likelihood they will wind up back in prison.

Skinner, who is a native of Mason City, made her comments this weekend on “Iowa Press” on Iowa PBS.