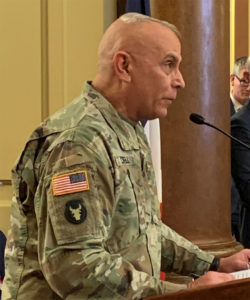 DES MOINES — The Iowa National Guard’s adjutant general is retiring on March 1st. Major General Benjamin Corell has been in the National Guard for 37 years.

“My wife has sacrificed much for my career. We’ve got seven grandkids,” Corell told reporters at the statehouse. “My grandparents influenced me growing up, gave me the values that I have. I want to put some values in my grandkids that have been passed down through my family.”

Reynolds announced his retirement Wednesday during Iowa Veterans Day at the Capitol in Des Moines. “I want to thank him for his decades of selfless service to this state and this country,” Reynolds said. “Not only has he served, but I can’t imagine going through the last two years with anybody else at the helm of the National Guard. Your story and your service is incredible and this state is better for it.”

The state’s Emergency Operations Center is at the Iowa National Guard headquarters. Reynolds spent many hours there directing the state’s early response to the pandemic.

If the more than 9,000 soldiers and airmen Corell commands in the Iowa National Guard were a single community, it would be Iowa’s 45th largest city. Corell paid tribute to his troops and all veterans during his remarks at the Iowa Veterans Day event late this morning.

“In the 100-plus years since the end of World War I, our nation’s warriors have battled tyrants and terrorists in defense of this country. We have traveled to distance corners of the globe to serve in dangerous and difficult conditions,” Corell said. “In every one of those places, there have been Iowans who have answered the nation’s call and have done the dangerous work that our nation’s asked us to do.”