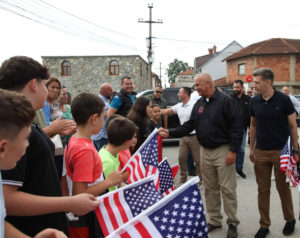 JOHNSTON — Top leaders in the Iowa National Guard are back in the state after a trip to Kosovo where they toured several cities and observed military training.

Adjutant General Ben Corell says it continues a ten-year sharing agreement between the two countries. “We have made great strides in building confidence in the organizations between the Kosovo Security Forces (KSF) and the Iowa National Guard. And it’s really been a privilege to step back and look at how far we’ve come in these 10 years, as far as their development,” said Corell.

Corell took over leadership of the Iowa National Guard when Major General Tim Orr retired, and Corell credits him with getting the relationship going. He says it isn’t a one-way experience. “We gained just as much on our side as far as our ability to train with a foreign military, build that trust and confidence in each other, and build those relationships that have developed since we started this,” he says.

General Corell had previously had a NATO assignment in Romania where he says he learned about building interoperability between militaries. “What I’ve learned in that time, is you don’t build trust and relationship through email or phone calls, you’ve got to be on the ground and working side by side to build that,” Corell says. “And what I’ve seen is we are well on the road with those relationships, and we continue to focus on the future.”

He says the current situation in Europe shows how important such relationships are. “The United States has a large military force. But we know we can’t go it alone in a future conflict,” he says. “It takes allies, partners, and friends that you’ve developed over time to build that trust, to ensure that when you when you’re asked to go out to engage an enemy, that you can communicate with each other, you have similar understanding and the tactics and similar understanding and the capabilities.”

The Iowa Air National Guard’s 132d Wing in Des Moines, Iowa, also conducted a large joint medical exercise with the KSF –culminating a five-year training cycle that included multiple bilateral training events. General Corell says that is one of the things beyond basic military operations they can help Kosovo with.

“Not only with the medical capabilities out of the Iowa Air National Guard that we also have the 168 Cyber Squadron, that is a big value asset with the KSF. Every, every nation on earth needs cybersecurity in capability. There’s threats out there, that not only can cause damage to the military, but commercial infrastructure, banking,” Corell says. He says it is taking care of the people of Kosovo as we are taking care of the citizens of Iowa and the United States.

The trip followed a recent visit from KSF leadership to the U.S. where they had the opportunity to tour Camp Dodge facilities, observe a joint cyber competition at Iowa State University, and recognize Iowa Army National Guard and KSF troops during joint maneuver training at Camp Atterbury, Indiana.