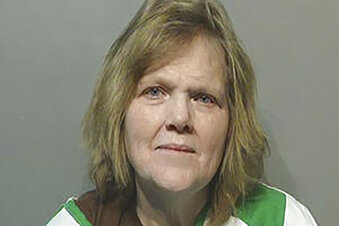 This Feb. 19, 2021, photo provided by the Polk County Jail in Des Moines, Iowa, shows Deborah Sandoval. Sandoval and her son Salvador Sandoval Jr. were arrested on charges related to the Jan. 6 riot at the U.S. Capitol after a longtime acquaintance tipped off the FBI to their alleged involvement. (Polk County Jail via AP)

DES MOINES, Iowa (AP) — A 54-year-old mother and son from Iowa are facing new charges arising from their alleged roles in the Jan. 6 riot at the U.S. Capitol.

Deborah Sandoval, of Des Moines, and her 23-year-old son, Salvador Sandoval, of Ankeny, were each originally charged with three counts after their arrest on Feb. 19.

They are not currently in custody. They are scheduled to be arraigned Friday in Washington D.C.