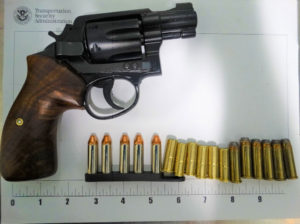 DES MOINES — A spokeswoman for the Transportation Security Administration says the number of guns found at Iowa airport security checkpoints was up in 2022.

TSA spokeswoman Jessica Mayle says 22 guns were found in Iowa, compared to 14 in 2021. “Not what we see in many other parts of the country– but, you know, it’s incredibly dangerous, we just want to remind people that you should never bring a gun through the checkpoint, it’s never going to make its way onto the aircraft in the cabin,” she says “And if you do need to travel with a firearm, there is a way to do it safely.”

Fifteen guns were found at the Des Moines Airport, up six from the previous year. Six guns were found in Cedar Rapids, one in Waterloo, which was an increase of one gun for each airport. The nationwide number of guns found was a record for the second year in a row.

“Overwhelmingly, when we find a guy and on the X-ray, and we say ‘whose the bag is this’ and we identify the passenger, they say, ‘Oh, my gosh, I totally forgot I had that I did not mean to do that, I did not mean to bring that bag or that item in that bag’, Mayle says. “And we always say responsible firearm owners always know where their firearms are.”

Mayle says having a gun in the airport is dangerous, and when one is found it can back things up. “The entire screening process stops, we don’t even take the gun out of the X-ray machine. Everything stops until the police arrive. They’re the ones who come and take the gun out and handle it,” she says. “So don’t just think about yourself and slowing yourself down and having a big fine on yourself. But everyone in line behind you is going to have their day disturbed as well. So just don’t do it.”

Mayle says each city handles the process a little differently when a gun is found — but you can be sure you will hear later from the TSA. “You are going to get a fine in the mail. It doesn’t happen that day when you’re at the airport. You get a ticket in the mail, and then you have the option to contest it later. But it can be in the hundreds or even thousands of dollars. So it’s not a cheap mistake by any means,” she says.

Passengers are permitted to travel with firearms in checked baggage if they are unloaded, packed separately from ammunition in a locked hardback case, and declared at the airline check-in counter. Mayle says they advise you to start packing with an empty bag to avoid any mistakes.

“If you start with an empty bag, you’re much less likely to put one of those items you shouldn’t have in, and you just you’re a lot more conscious of your decisions,” Mayle says. “And I think all of these people who we caught with firearms probably really wish they had just started with an empty bag that day because they never would have put it in.”