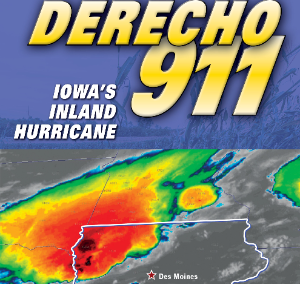 CEDAR RAPIDS — Many Iowans would like to forget much of 2020, but the powerful storm that slammed the state last August is being remembered in great detail in a new book, “Derecho 911: Iowa’s Inland Hurricane.”

Retired TV meteorologist Terry Swails and his journalist wife, Carolyn Wettstone, co-authored the book about the unprecedented windstorm that devastated their home state.

“Anybody who’s interested in weather would certainly be drawn to it, but for me, I thought it would be a keepsake for people that were impacted by this,” Swails says. “I wanted people to have that documentation of the storm and I wanted them to understand why it happened.”

While Swails offers an in-depth look at the weather patterns and conditions that created the storm, Wettstone focuses on the human-interest perspective. He says it’s important to preserve the narratives of the people who lived through the natural disaster.

“This is the most damaging thunderstorm in United States’ history,” Swails says. “The damage total from the storm has reached $13-billion and most of that’s in the state of Iowa. In many different ways, including agriculture, there were just so many things that were disrupted around the state of Iowa.”

The damaging derecho was a stunning surprise and Swails says no one could have predicted how quickly it intensified.

“Unlike other situations with blizzards or tornadoes, we usually have a couple three days where we see the parameters coming together,” Swails says. “This one really came out of the blue. Even that very morning, most of the forecasts barely even had a 40 or 50% chance of thunderstorms.”

Winds in the storm peaked around 140 miles-an-hour in the Cedar Rapids area, shearing off up to 70-percent of the city’s tree canopy. Those winds were so powerful, they were the equivalent of an E-F-3 tornado or a category-four hurricane.

“But that went over about a 50-mile wide swath all the way from western Iowa, right through the center portion of Iowa and eventually into Illinois,” Swails says. “Essentially, it’s like have a 150-mile long tornado that’s 50 miles wide. The damage was just really extreme within that corridor.”

The couple now lives in Portland, Maine and happened to sell their Marion home just prior to the derecho. Order the book through the website: derechobook.com.