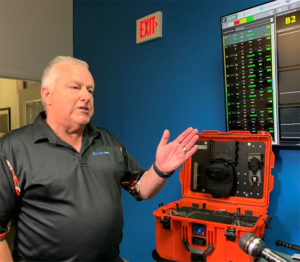 JOHNSTON — An Iowa-based company has been shipping critical medical equipment to Florida as the state prepares for the arrival of a possible hurricane.

“Athena primarily responds to catastrophes and mass casualties and when hurricanes come in and threaten this country, a lot of our customers buy our products,” says Mark Darrah, CEO of Athena GTX in Johnston. “and they can respond to multiple injuries simultaneously.”

The company’s gear includes small patient monitors used in some of the tent hospitals set up in big cities two years ago for COVID patients as well as Houston-area nursing home residents who had to evacuate due to Hurricane Harvey in 2017.

“Athena focuses on highly mobile medical monitoring…so when we can produce a medical monitor that stays with the patient and is small enough to ride with the patient and then connect remotely using what you’re familiar with your iPhones and iWatches,” Darrah says. “It’s an excellent opportunity to connect a physician or a care provider to patient before they see them.”

One EMT can use the company’s system to monitor up to 20 patients and respond if a monitor shows a patient in distress. Athena was founded in California in the late 1990s and moved to Iowa in 2007. EMS and the Red Cross are among its key customers. Darrah says they’re able to get the equipment to its destination in less than 48 hours.

“When FEMA comes in, they will stage for the most likely landfall and we don’t have anything to do with how they do that,” Darrah says. “What we’ll see is an increase orders and we’ve had a tremendous increase in orders in the last few weeks.”

Darrah says some of the company’s equipment has been used in Ukraine and surrounding areas since Russia’s invasion and refugees fled into Poland and elsewhere. Senator Chuck Grassley toured the company’s Johnston office and warehouse Monday and met with many of the company’s 26 employees. Three Athena employees are based in Texas, which has been hit with 11 hurricanes since 2010.