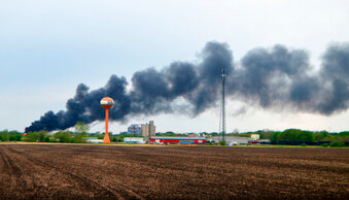 SIBLEY — The evacuation order was lifted for portions of Sibley last night and residents who’d been out of their homes since Sunday afternoon’s train derailment were allowed to return. Sibley businesses may resume normal operations today.

Kristen South, a spokesperson for the Union Pacific Railroad, says cars that derailed were carrying hydrochloric acid, asphalt and potassium hydroxide, but fears about a more combustible chemical were allayed.

“There was a car involved in the derailment – it was empty. It had been carrying liquid ammonium nitrate, but again, it was empty,” she says. “There was likely some residue in the car, but it was not full.”

Ammonium nitrate is used in fertilizers. No crew members were hurt in the derailment.

Staff from the Iowa Department of Natural Resources have joined federal officials at the derailment site to assess the environmental impact of the wreck and develop a cleanup plan.