Iowa birdwatchers asked to keep eye out for signs of sickness 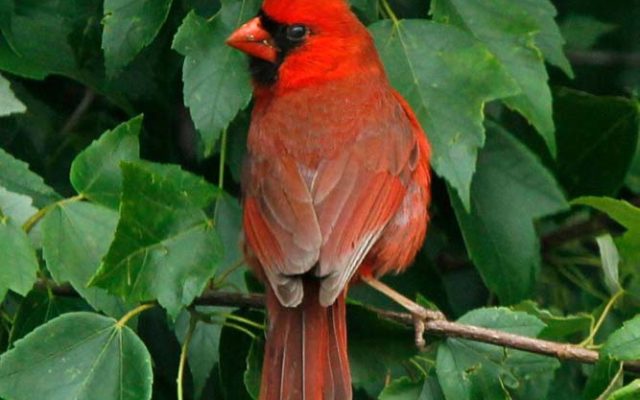 A cardinal (Photo by Karl Schilling of Des Moines)

DES MOINES — The Iowa Department of Natural Resources is putting bird watchers statewide on alert to be vigilant for anything unusual they may spot with the health of songbirds.

There’s a sharp uptick in reports of sick or dead songbirds being found in the Mid-Atlantic states with reports as far west as Indiana. Rachel Ruden, the state wildlife veterinarian, says the reports first came into wildlife rehabilitation centers in northern Virginia around Washington D.C.

Ruden says, “These rehabbers began receiving reports of these birds that had either swollen or crusty eyes and these neurologic signs like twitching or what people might consider seizures, that kind of thing.” As yet, there have been no reports of such activity in Iowa.

The cause of the bird illnesses and deaths remains a mystery. Theories are wide-ranging, from pesticide exposure to it having something to do with the emergence of the Brood X cicadas, though nothing is yet certain.

“If it’s something transmissible or infectious like a bacteria or a virus or fungus, that’s something that with birds intermixing and their normal travels that we could end up seeing here,” Ruden says. “It’s just an unknown at this point if Iowans need to worry.”

The experts in affected states recommend residents take down their bird feeders to reduce the possibility of congregating birds and facilitating the spread of disease, but Ruden says that is not something Iowans need to do. However, she does want Iowans to keep watch.

“Based on other state reports, it’s primarily grackles, common grackles, European starlings and blue jays and they tend to be fledgling birds, so, younger birds,” Ruden says. “There’s also been reports of American robins and northern cardinals. A lot of those birds people see at their bird feeders routinely.”

If you spot five or more birds with eye troubles or neurologic signs like disorientation, tremors and loss of balance, contact Ruden at [email protected]