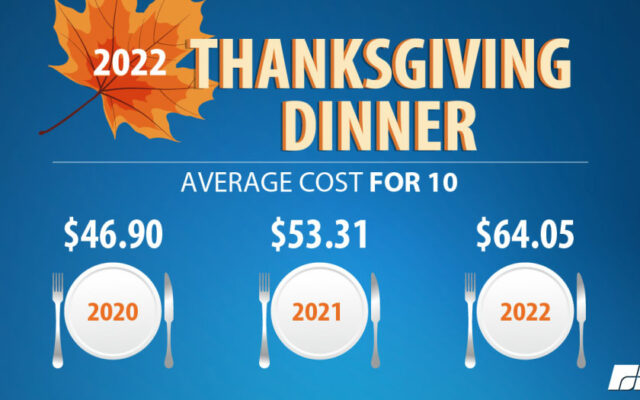 DES MOINES — The cost of the items used to prepare a typical Thanksgiving dinner for ten people is up again this year in the annual survey by the American Farm Bureau.

Cryan says the increased cost will be a burden for many, but farmers have done a good job of providing. “I think it’s worth pointing out that even with these increases, this market basket still works out to about six and a half dollars per person for what is essentially a Thanksgiving feast,” he says.

Cryan says general price inflation is part of the reason for the increase. “Inflation has been running at a rate of about seven to nine percent this fall, year over year. That’s about a third of the increase in the food basket and inflation is a serious issue that’s that we’ve been attempting to address general price inflation. It robs consumers and farmers of their buying power,” according to Cryan.

He says increased production costs, supply chain issues, and other factors also contributed to the increase. The cost of the 16-pound turkey was up 21% from last year to around $29. Cryan says that’s an average, and you may be able to find some cheaper birds as we get closer to the holiday.

“Since we’ve done the survey, the number of stores that are featuring turkeys in their circulars at discounted prices,” Cryan says. “Those discounts will probably grow. Even though it’s been it’s been a tighter market. And even though there’s been some challenges in the turkey supply chain production is only down about two percent this year at this point compared to last year.”

Cryan says the amount farmers make has not increased despite the retail price increase for the products. “The U.S.D.A. has put out numbers on a regular basis that show pretty consistently for the last several years that farmers receive about 8% of the retail price of food purchased for consumption at home,” he says.

The 12-ounce bag of fresh cranberries went against the trend — as it was down about 14%.