In 2020 reelection bid, King plans to tout ties to Trump 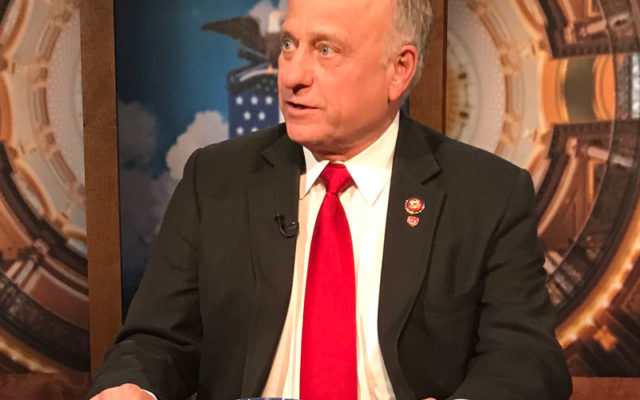 JOHNSTON — Iowa Congressman Steve King says he’ll run for re-election in 2020 and he says the controversies surrounding him recently were amplified by cyber bullies.

David Yepsen, moderator of IPTV’s “Iowa Press” program, had this question for King when the show was taped Thursday.

“Are you sorry for anything that you’ve said?” Yepsen asked.

King responded: “I have nothing to apologize for, Dave. We know what the news media has done continually.”

Republican leaders in the U.S. House condemned King’s comments about white supremacy that were published in the New York Times and stripped King of his committee assignments this year. King said certain phrases have been “weaponized” by critics on Twitter, Facebook and other platforms. King said that’s why Republicans lost House seats in 2018 — and he nearly lost his own race.

“A lot of this was nearly a perfect storm. Part of it was orchestrated. Some of it was just you would call it just good luck on their side,” King said. “By the time we got to January 10, however, I was warned they were going to try another move. They tried another move and that came out of The New York Times.”

King, who has asked supporters to pray that he be reinstated on committees, also said today that he’d have no real influence on committees since Republicans lost the majority in congress.

King has served in congress since January of 2003 and will be seeking a 10th term in 2020. State Senator Randy Feenstra of Hull and a couple of other Republicans in the fourth congressional district have announced they intend to challenge King in the GOP primary election next year. King suggested today a vote against him is a vote against President Trump’s agenda.

“When you have somebody that represents the platform, that is afire for American and our Iowa values, somebody that has been able to inject a lot of these values into the presidential race and when I walk into the Oval Office today and I look around and I think: ‘My gosh, we got our Iowa values here, in this Oval Office, embodied within President Donald Trump,’” King said. “They’ll think about all of that and I think they’ll want to support the president and they’ll want to support me.”

Trump made an appearance in Iowa to help King raise money for his 2014 campaign, then Trump was among the GOP candidates who appeared at an Iowa Caucus kick-off event King hosted in January of 2015 in Des Moines. King endorsed Trump’s rival Ted Cruz before the 2016 Iowa Caucuses.

King’s appearance on Iowa Public Television will be broadcast tonight at 7:30 p.m.