Ick, it’s a tick! Iowans need to be watchful for tiny hitchhikers 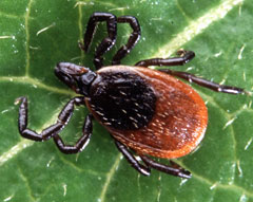 DES MOINES — Iowans need to fight the bite this summer, especially when it comes to ticks which may be carrying Lyme disease.

Epidemiologist Rebecca Osborn says Iowans would be wise to check for ticks after spending any amount of time outdoors.

“After coming inside, do a thorough tick check on yourself and your family members,” Osborn says. “Don’t forget that some juvenile ticks can be as small as a poppy seed, so a careful check of your entire body is important.”

Iowa ranks 17th among the 50 states for reported cases of Lyme disease and Osborn says we should all take precautions.

Left untreated, Lyme disease can have serious consequences, but caught early and with antibiotics, most people usually recover rapidly and completely.

“When you’re talking about Lyme disease, somewhere between 20 and 50 percent of all ticks will be carrying the bacteria that causes Lyme disease,” Osborn says, “and that’s of a certain type of tick, the deer tick, so not all ticks are deer ticks.”

Iowans can protect themselves from tick bites by using repellent on skin and clothing, wearing long pants and long-sleeved shirts, and checking yourself for ticks after being outdoors. If you find a tick attached to your skin, remove it right away.

“All you need is a pair of tweezers. Just pull it out with a steady pressure,” she says. “Once you’ve removed the tick, you want to wash that area with soap and water, and monitor that location for the developments of a rash in the next month.”

The latest figures the Iowa Department of Public Health is supplying on Lyme disease are for 2017, in which 255 cases were reported statewide. Most cases occurred in the eastern half of the state.