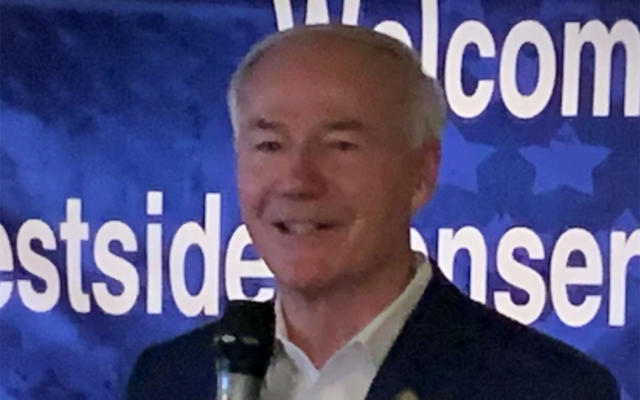 “I believe that we need to move away from a personality and move back to ideas and principles,” Hutchinson said Wednesday during an appearance at the Westside Conservative Club in Urbandale, Iowa.

Hutchinson is among the many potential presidential candidates of 2024 to campaign with Iowa GOP candidates before the election, but he’s the first to return to the state after the November 8th election. Hutchinson told this morning’s crowd he watched Trump’s announcement night.

“He is right in terms of his criticism of Biden and his policies, but it’s the same message that lost four years ago and lost this election cycle,” Hutchinson said, “and we can’t repeat that again.”

Many, but not all in the crowd applauded those sentiments. Hutchinson suggested the “fundamental lesson” of this year’s election is GOP candidates have to appeal to independents to win in a General Election.

“Voters across the country did not reject Republican ideas,” Hutchinson said. “They rejected some Republican candidates that they believe were too extreme and they did not want to go back to the debates of the last election and they said: ‘We’ve got to move forward as a country.’”

Hutchinson’s second term as governor of Arkansas ends in early January and he had planned to announce his decision about a presidential race in January, but Hutchinson told reporters from Radio Iowa and the Des Moines Register that Trump’s jump into the 2024 race may prompt him and others to make their declarations soon.

Voters are “weary” of the chaos Trump creates, according to Hutchinson. “It’s different than 2016. Trump was new on the scene. He was able to pick off his opponents. People thought it was entertaining…I think America’s figured it out,” Hutchinson said. “They’re not impressed with his junior high social skills.”

Former Governor Terry Branstad campaigned enthusiastically for Trump in 2016 and 2020, but Branstad is not announcing his preferred candidate for 2024.

“In my opinion, it’s way too early,” Branstad told reporters this morning. “We, in Iowa, have always prided ourselves on the ‘First in the Nation’ precinct caucuses and encouraging candidates to come here and meet the people.”

Branstad was among the crowd for Hutchinson’s speech this morning and then met one-on-one with Hutchinson. Branstad told reporters there are “a lot” of potential candidates who are likely to compete for the GOP’s next presidential nomination.