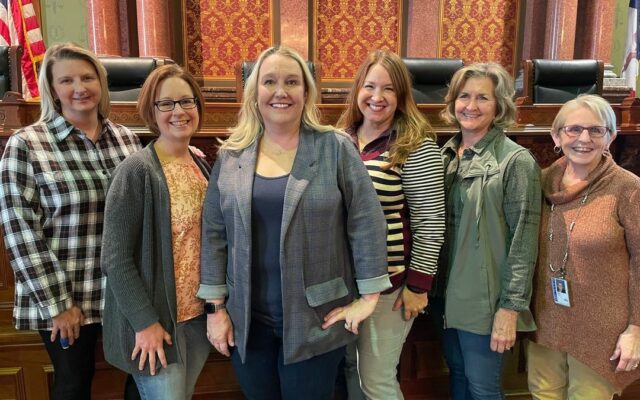 DES MOINES — All six members of the leadership team for the 36 Democrats in the Iowa House this year are women.

After each election, Republicans AND Democrats in both the House and Senate meet privately to choose senators and representatives to serve in leadership positions. This is the first time one of those four partisan groups will have women in every leadership post.  “We’re going to continue to make sure that the voices that need to be heard from across the state are heard, including women’s voices, which are sometimes drowned out up here, let’s be honest,” Konfrst says.

Lindsay James of Dubuque is minority whip, the number two Democrat in the Iowa House. The assistant leaders for House Democrats are Representatives Sharon Steckman of Mason City, Sue Cahill  of Marshalltown, Heather Matson of Ankeny, and Amy Nielsen of North Liberty.

Konfrst, who has been House Minority Leader since mid-2021, posted a photo of the group on social media.  “I got a letter from a little girl who’s a third grader, that said she was so excited to see all girls in charge,” Konfrst says. “What they see is what they can be and so if we can show that women can lead, I think it’s really important for future generations.”

After this year’s General Election, Senate Republicans chose Amy Sinclair of Allerton to be Senate President. She’s the second woman elected by her peers to that post.