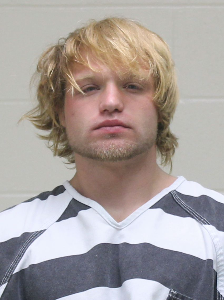 MASON CITY — A homeless man has been jailed in Cerro Gordo County after stealing a truck.

A criminal complaint states that at about 6:30 on Wednesday morning, 24-year-old Logan Conway allegedly approached a residence in the 1600 block of Opal Drive in Mason City, loaded his bicycle into the back of a truck in the driveway and drove away. The owner of the vehicle says they watched the vehicle leave and that the keys were left in the vehicle.

The vehicle was observed in the area of US Highway 65 and County Road B-20 about 15 minutes later, with the vehicle being stopped with Conway being arrested.

Conway was charged with second-degree theft, a Class D felony. He was due in court for his initial appearance today and is being held in the Cerro Gordo County Jail on $5500 bond.