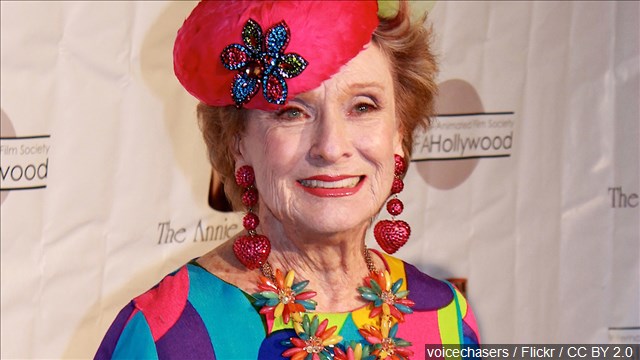 DES MOINES — Des Moines native Cloris Leachman, the winner of Emmys and an Oscar for her work in movies and television, has died of natural causes at the age of 94.

Her acting career started in Des Moines in 1941. Michael Morain of the Iowa Department of Cultural Affairs saw Leachman in 2016 when she was honored at the Des Moines Playhouse.

“I had a few short, brief, but delightful encounters with Cloris Leachman,” Morain said. “Anyone who crossed paths with her or saw her on screen understands that she was fearless. Her sense of humor is one of a kind and her feisty spirit came across in everything she did on stage and just in her everyday life.”

Leachman’s 1971 Academy Award was for her dramatic role in “The Last Picture Show.” She won two Emmys for her role as the landlord on “The Mary Tyler Moore Show.” The Des Moines version of a Tony Award is named the “Cloris” and Leachman was on hand as the “Clorises” were handed out five years ago.

“She just had a ball as the guest of honor for her namesake awards,” Morain said. “She was just delightful: ornery and mischievous and really, really fun.”

Leachman was nominated 22 times for an Emmy — the record for nominations — and she won the award eight times. Her last Emmy was awarded in 2006, for her role as Grandma Ida on “Malcolm in the Middle.”

Leachman’s Oscar was briefly displayed for the opening of the “Hollywood in the Heartland” exhibit at the State Historical Building in 2014. During her Academy Award acceptance speech in 1971, Leachman thanked her piano and dance teachers in Des Moines and credited her mother’s imagination and sense of humor for leading her into show business. Leachman also thanked her late father, Buck Leachman, “for paying the bills” — drawing huge applause and laughter from the audience.