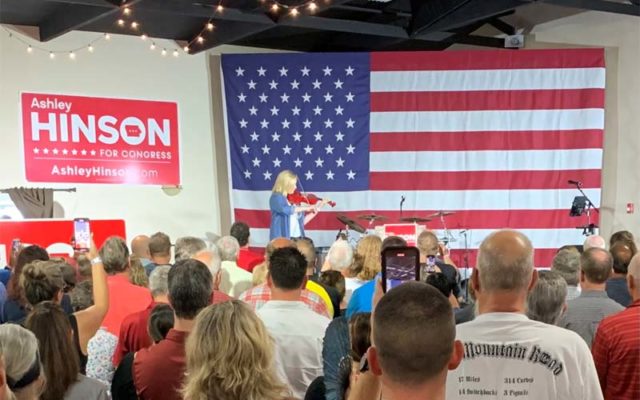 CEDAR RAPIDS — Republican Congresswoman Ashley Hinson kicked off her bid for a second term in the U.S. House with a fundraising rally this weekend.

Hinson started the Saturday afternoon event by playing the violin as the crowd gathered on the Linn County Fairgrounds sang the National Anthem. The crowd was enthusiastic about Hinson and angry about President Biden’s decision-making on Afghanistan. Some people in the crowd shouted things like “traitor” and “impeach him.”

“I don’t know about you, but it made my blood boil. Did they have a plan?” Hinson asked the crowd, who responded: “No!”

Hinson touted Republican prospects in 2022. “Are we ready to get this done? Yes? Are you with me?” Hinson said, to cheers. “Awesome! I am going to fight like hell to make sure we take back the House and fire Nancy Pelosi.”

Governor Kim Reynolds accused Biden and Democrats in Congress of engaging in a horrible experiment. “Are we ready to go to the mat to protect this country?” Reynolds asked.

Texas Senator Ted Cruz was the closer of the event. “We should not abandon a single American in Afghanistan who wants to get out of there,” Cruz said, to applause.

Liz Mathis, a Democrat from Cedar Rapids, has announced she’s running challenge Hinson next year. Mathis said by inviting Cruz to Iowa, Hinson propped up the presidential ambitions of a man who “glorified insurrectionists” who attacked the U.S. Capitol in January.