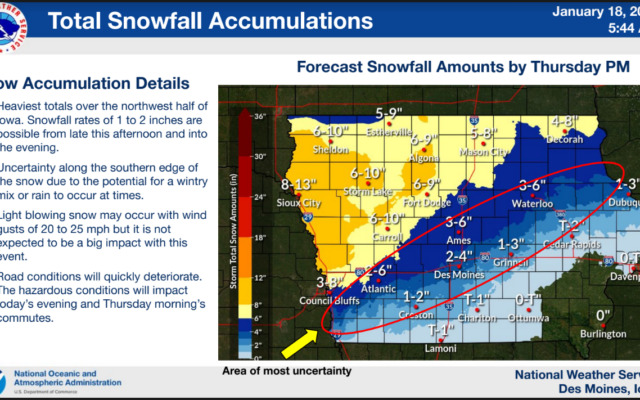 MASON CITY — Heavy snow is predicted as a Winter Storm Warning is posted for this afternoon through tomorrow morning for Iowa’s northwestern half.

National Weather Service Meteorologist Rod Donavon says the Sioux City area may get more than a foot of snow, while Keokuk may just see rain and flurries.

“We’re still expecting a swath of moderate-to-heavy snowfall, especially north of Highway 30, and that would occur mainly later this afternoon and especially in the overnight hours,” Donavon says. “We could see snowfall rates pushing that one- and even two-inch per hour rate during that timeframe.”

Deep snow is likely across northern Iowa, with 6 to 10 inches possible in Sheldon, as much as 9 inches in Algona, and up to eight in Mason City and Decorah. “That northwest half of the state, really, we have in the forecast generally a five-to-nine inch throughout that area and most of that’s going to occur later this afternoon and through the evening hours.”

Donavon says conditions will gradually improve on Thursday. “We’ll have some light snow lingering around throughout tomorrow morning so that, along with the breezy north winds, it’ll keep snow on the roadways and certainly travel will be treacherous at times,” he says, “before that all moves out into the afternoon.”