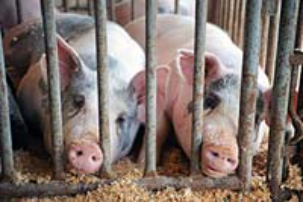 FOREST CITY — The Hancock Board of Supervisors has unanimously approved the construction permit for hog confinements southeast of Forest City. Summit Pork plans to build two buildings, each of which will house just under 5000 head of hogs.

Summit consultant Kent Krause told supervisors the facilities would be about six-tenths of a mile from the water in Torkelson Pits Wildlife Area.  “DNR didn’t have any issues with the site when we were out on the site visit,” he says.

Manure will be stored in pits underneath the buildings. Krause indicates the operation is expected to produce about 1.6 million gallons of manure annually and it will be applied on fields that could handle about twice that amount of manure.  “The fields all score in the very best rating of the Iowa Phosphorus Risk Index, that means there’s a very low or low probably of phosphorus loss to Iowa’s water system,” he says, “and, of course, then the manure management plan is balanced with the crop usage rates for nitrogen.”

The facility will be just over half a mile from the property line of Torkelson Pits, a 97 acre county park with wetlands and forested areas for hunting and fishing.

Hancock County Supervisors held a public hearing on the hog confinement project before approving the permit. The only comment came in writing — an objection from Bob Kern of Garner. Kern said Summit, which is also developing a carbon pipeline in the area, has deceived and divided neighbors against one another.

== The Worth County Board of Supervisors on Monday also held a public hearing about an application from Summit to place a 4990-head confinement in the county. Supervisor Mark Smeby approved Summit’s application to build, while AJ Stone was against it. Supervisor Enos Lobert was absent. Despite the application failing on a 1-1 vote, it still goes to the Iowa Department of Natural Resources for their review.