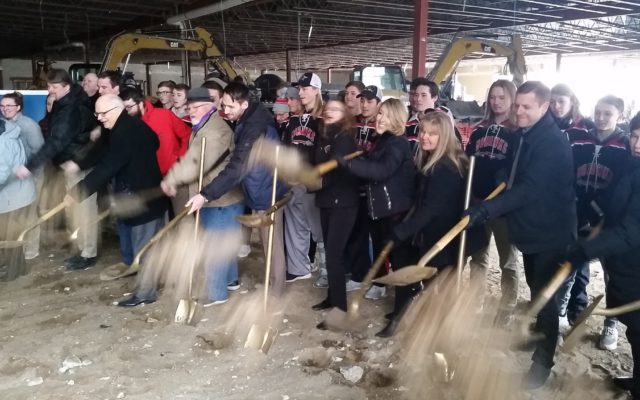 MASON CITY — A groundbreaking ceremony was held Monday afternoon for the multi-purpose arena that’s part of the River City Renaissance project. The arena is being placed in the former JC Penney location of Southbridge Mall and it is part of a $38 million effort to revitalize the mall and the downtown area.

Mayor Bill Schickel says the project will help create as well as help to fill available jobs in the community.  “Let’s look at jobs. Not only the jobs that this project creates, the construction jobs, the permanent jobs, not to mention the $9 million payroll that it will add to our community. That’s all great for people that are looking for jobs, but we also have jobs looking for people in Mason City and north Iowa. This will help us attract and keep and retain the kind of workforce we need to fill the already 1000 jobs that are available here.”

Schickel says Mason City is showing the rest of the region that empty malls with proper planning can be repurposed for the future. “Let’s look at the example we’re setting. Communities across Iowa, indeed communities across the nation face the very same thing that we face in Mason City, deteriorating malls that need to be repurposed. The difference is that we’re being proactive. We’re setting a shining example of preserving our past while preparing for the future.”

Steve Crane with Mason City Youth Hockey says they’re looking forward to moving into a new facility after over three decades in the North Iowa Ice Arena.  “We’re thrilled to start a new chapter in our organization and appreciate the tremendous support that we’ve received from the public, the City of Mason City, Cerro Gordo County, the Mason City Chamber of Commerce, Visit Mason City, the North Iowa Fair Association, and many local business leaders. You’ve all reached out to us and have been very helpful in this process as we’re learning along the way of how to start a brand new facility like this. It’s not easy, it takes a lot of hands.”

Crane says a new facility like this will boost the visibility not only of Youth Hockey but entertainment in general in north-central Iowa.   “This new facility will enhance our ability to introduce more people to the enjoyment of ice sports and provide a great entertainment venue for north Iowans and the thousands of visitors that will come to visit this new facility.”

The arena is part of the Iowa Reinvestment Act project that also includes the addition of a convention center complex to Music Man Square, a hotel in the eastern part of the main parking lot of Southbridge Mall, as well as a performing arts pavilion on the mall’s north side.