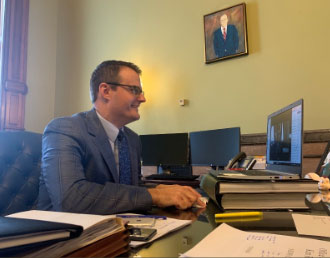 “Last year on a trade mission to Israel I learned about the United Hatzalah model for EMS. Hatzalah is the Hebrew word for rescue,” Gregg says. “Think of it as Uber, but for EMS, allowing us to crowd source emergency responders. When an emergency occurs and 911 is called nearby trained volunteers are alerted through an app on their phone, allowing them to respond quickly and stabilize the patient until an ambulance arrives.”

Gregg suggests the system could be adapted to address the lack of ambulance services in rural Iowa. “As it stands today, too many rural Iowans have limited access to timely, lifesaving intervention in an emergency,” Gregg says.

In Jerusalem, the Hatzalah EMS app is used by 6200 trained volunteer medics who respond on specially equipped motorcycle ambulances.

“This Israel model has driven down response times in Jerusalem to 90 seconds on average,” Gregg says. “We believe this concept can be adapted to help address our EMS challenges in rural Iowa and we’ll be funding a pilot program to do just that.”

The Hatzalah model is being used in some areas of the United States, but mostly in urban areas.