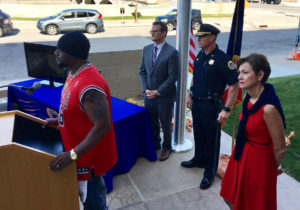 DES MOINES — Iowa’s governor says she hopes to speak soon with the leader of a Des Moines youth program who’s in serious condition after a shooting at the facility. Des Moines Police have identified the two students who were killed Monday.

Holmes, who raps under the name Will Keeps, founded Starts Right Here for Des Moines Public Schools students. In 2021, Reynolds held a public event at the facility in downtown Des Moines. “It was so important to Will that they had a beautiful facility to go to so that these kids felt that this was better than being on the streets and being involved in a gang and being involved in drugs,” Reynolds said.

Des Moines Police have charged an 18-year-old with two counts of first degree murder for killing students Gionni Dameron, who was 18, and 16-year-old Rashad Carr. Des Moines Police say 18-year-old Preston Walls was also a student at Starts Right Here and he’s been charged with attempted murder for seriously wounding the program’s founder. Holmes is in serious, but stable condition and has a long recovery ahead, according to a statement from his family. They said he’s “more determined than ever” to continue working with at-risk youth.