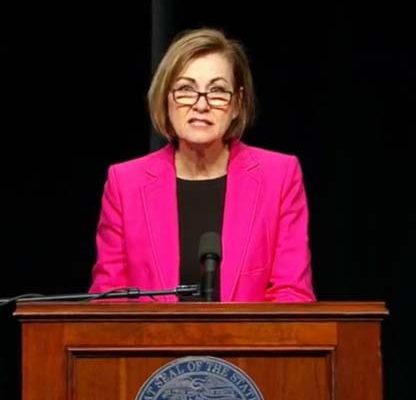 DES MOINES — The one-year anniversary of the first cases of Covid being reported in the state was this past Monday and Governor Kim Reynolds said Wednesday that Iowa is about to hit another, more positive milestone.

It’s projected the one-millionth Iowan will be vaccinated against the virus sometime in the next few days.

Getting scheduled for an appointment is still a challenge. Iowans 65 and older can now call 211 to talk with a “vaccine navigator” to get scheduled for a shot.

“We’ve projected that 70% of our first responders, our child care providers and our K-12 teachers have received at least one dose,” the governor said, “and more than 90% of our long-term care residents will be complete with their second dose by the end of the month.”

Almost 94% of Iowans who are 65 and older have gotten at least their first dose of a vaccine, according to the governor. Next week, nearly 95,000 first doses of the Pfizer and Moderna vaccines are headed to Iowa. State officials say Iowa could get 4000 doses of the Johnson & Johnson vaccine as well.

“And this week, one year from our first confirmed cases in Iowa, we’re on track to vaccine the one-millionth Iowan,” Reynolds said during a news conference this morning.

Census data indicates there are about 2.1 million adults in the state.

More than 18,000 Iowans have received the new, single dose Johnson and Johnson vaccine. Reynolds said they are among the 160,000 Iowans who work in food processing, ag production and manufacturing companies or who live in communal settings that are on the state’s initial list for the Johnson & Johnson shots.

“Many companies have already arranged to host vaccination clinics for their workforce with their local public health departments or local HyVee pharmacies,” Reynolds said, “so we’ll continue to make progress even as we wait for our Johnson & Johnson vaccine supplies to resume and stabilize.”

In the past week, 51 Iowa companies have hosted mass vaccination clinics for employees.

Reynolds said “a large segment” of the state’s population is now eligible for a vaccination in many counties. That’s because state officials announced late Thursday that smokers and Iowans with medical conditions like asthma and diabetes can sign up to get a shot. Reynolds isn’t ready to open vaccinations for all Iowans, however.

“I think we have a good process in place,” Reynolds said, “and as we see we see those numbers continue to increase and we continue to open up and vaccine more and more Iowans, we’ll take that next step.”

The governor told it’s perfectly fine for eligible Iowans to go outside of their home county to get a shot if they’re unable to schedule one close to where they live.