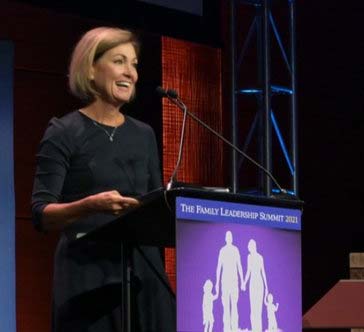 DES MOINES — Republican Governor Kim Reynolds is urging conservative Christians to fight back against Democrats in power in Washington.

“While it’s easy to get lost in noise or the online rage machine, don’t get discouraged and don’t lose sight of what’s at stage,” Reynolds said. “We know the administration’s ideas are broken and they’re breaking this country.”

Reynolds accused the President Biden’s Administration of pursuing a radical social agenda backed by liberal activists and corporations. “The elevation of angry, ever-shifting moral code of wokesness, bailouts, tax hikes, lock downs, open borders, closed schools,” Reynolds said. “Believe me. This is not an agenda for Iowa and it is not an agenda for our country.”

Reynolds was cheered repeatedly, but the loudest cheers were for state laws she approved this year, including one that requires schools to start the day by leading students in the Pledge of Allegiance..  “Yeah! This is America,” Reynolds said as the crowd applauded. “And we banned critical race theory in any curriculum or training that teaches that the United States or Iowa is fundamentally racist or sexist.”

Reynolds reviewed the abortion restrictions she’s signed into law that have stalled after court challenges and told the crowd the current administration is out-of-touch with the public on the abortion issue.  “As we look to the next year and a half, we desperately need to maintain and intesify our grassroots energy and fight back against an overzealous federal government,” Reynolds said. “…But also we can build a robust alternative, one that protects faith, family, life and our American values. We can do it! There’s power in all of us.”

Reynolds was the keynote speaker Friday at the day-long Leadership Summit hosted by The Family Leader.