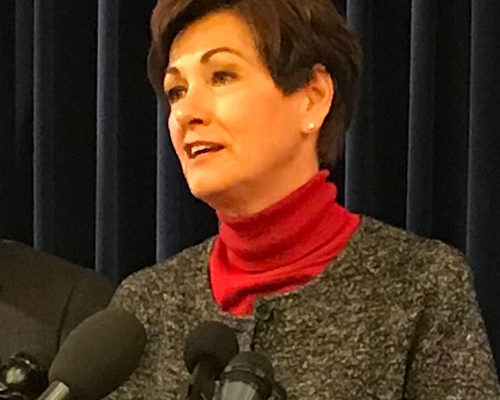 DES MOINES — Governor Kim Reynolds is offering few public clues about her views on how a bill legalizing sports betting should be structured.

“I’m going to watch it. I’m not going to weigh in,” Reynolds said during her weekly news conference. “I’m going to let it go through the legislative process. That’s where issues…have a chance to get fully vetted.” Legislators have been holding hearings this week on a variety of approaches to legalized sports betting in Iowa.

The general consensus among lawmakers directly involved in drafting a deal is that it will allow betting on professional and college sports. The governor has indicated she is open to the idea of granting state licenses to sports betting operations.

“You know, I think it needs to be regulated,” Reynolds said. “It’s happening. It’s happening to a big extent.”

Key legislators say part of the plan may be allowing people within the state’s borders to use their smart phones to place their bets on sporting events. Reynolds was asked during her weekly news conference if she is comfortable with fans inside Iowa, Iowa State and UNI arenas and stadiums placing bets as they attend the game they’re betting on.

“That’s the great thing about the legislative process,” Reynolds replied. “That’s where we start to really address and identify some of the issues like you just raised.”

Reynolds did not indicate whether she favors or opposes letting fans at Iowa college sporting events wager on the games or matches they’re attending.