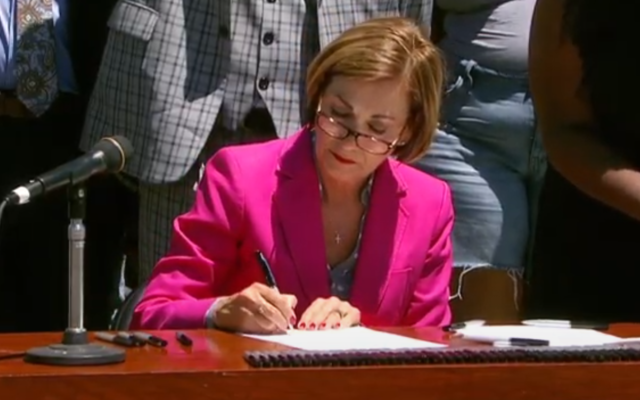 DES MOINES — Governor Kim Reynolds has signed a bill into law that makes it easier for plumbers, electricians and others who’ve worked in professional occupations in OTHER states get a license to work in Iowa.

“A rigorous professional licensing system to protect the health and safety of our people and our communities is absolutely appropriate,” she said today, “but when that system becomes onerous and burdensome to those seeking opportunity and when it creates unnecessary barriers to people entering the workforce, changes need to be made.”

“We’re the first state to do that, so we’re definitely leading from that perspective,” Reynolds said.

The new law waives licensing fees for low-income Iowans. It also lets paroled prisoners get professional licenses if their crime had nothing to do with their occupation.

“This will again enable more ex-offenders to enter the workforce and it’s an important part of our second chances agenda,” Reynolds said.

Representative Shannon Lundgren, a Republican from Peosta, was among the lawmakers who worked on the bill.

“One quarter of all Iowans need a license to do their job,” she said during House debate earlier this month. “…The average licensed professional in the state of Iowa faces an average cost of $178 in fees and 288 days of required education or experience and these strict licensing requirements have a negative effect for all Iowans — increasing the costs of goods and services, restricting employment opportunities.”

Democrats like Senator Herman Quirmbach of Ames say the licensing changes in this new law are too broad.

“There are a lot of states that don’t have standards that are up to Iowa’s standards, that don’t protect their consumers as well as we protect our consumers,” Quirmbach said during Senate debate, “so we need to look at it on a case-by-case basis.”

The bill passed the Senate with Republican support. It passed the support with “yes” votes from Republicans and several Democrats. Governor Reynolds signed the bill into law Thursday. The new law does not make changes in the licensing system for teachers and school administrators.