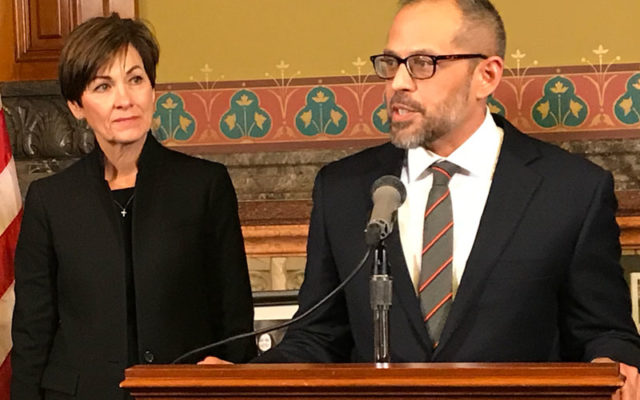 DES MOINES — Governor Kim Reynolds has appointed a 44-year-old who was born in Thailand as the next justice of the Iowa Supreme Court. Christopher McDonald has been serving on the Iowa Court of Appeals since September of 2013.

“I know that as the first minority or person of color appointed to the Supreme Court, people will have special expectations for me in terms of leadership and mentorship and I understand that. I appreciate that,” he said Wednesday. “I embrace those expectations and I’ll certainly do my best to meet or exceed them.”

Reynolds introduced McDonald as the jurist who will fill the vacancy on the Iowa Supreme Court Wednesday at an event in her capitol office.

“Judge McDonald has a wealth of life experience that has prepared him exceptionally well to serve Iowans on the Supreme Court,” Reynolds said. “It’s not an easy life. Judge McDonald was born in Bangkok, Thailand as the son of a Scottish-Irish father and a Vietnamese mother, spending his young childhood at military bases around the world before his family eventually moved to Des Moines.”

McDonald’s parents separated and he was raised by his mother on the south side of Des Moines. He got his undergraduate degree at Grand View University in 1997 and his law degree from the University of Iowa in 2001.

“In law school, he continued working to support his family while also excelling at his studies. He graduated first in his class and following law school he clerked for Judge Hansen on the Eighth Circuit Court of Appeals,” Reynolds said. “He practiced law at some of Iowa’s most distinguished law firms and at one of our international insurance companies.”

McDonald gave brief remarks after the governor introduced him, thanking his family as well as legal colleagues and clients.

“Each of you has given me sage advice over the years about life and the law,” he said, “and I’ve become a better person and a better judge for it and I thank you for your friendship and your mentorship.”

McDonald called his five-and-a-half years on the Iowa Court of Appeals as “the most rewarding professional service of his life.”

“In the next few weeks, I’m going to wind down my docket as a judge on the Iowa Court of Appeals and commence service as a justice on the Supreme Court. I am truly humbled to have the opportunity to serve in that capacity,” McDonald said. “To my future colleagues on the court, I look forward to many productive years of service together.”

Governor Reynolds said the colleagues who recommended McDonald for this new role used the words “brilliant” and “thoughtful” to describe him. McDonald is filling the vacancy created when Justice Daryl Hecht resigned for health reasons.

AUDIO of Reynolds and McDonald speaking in the governor’s office