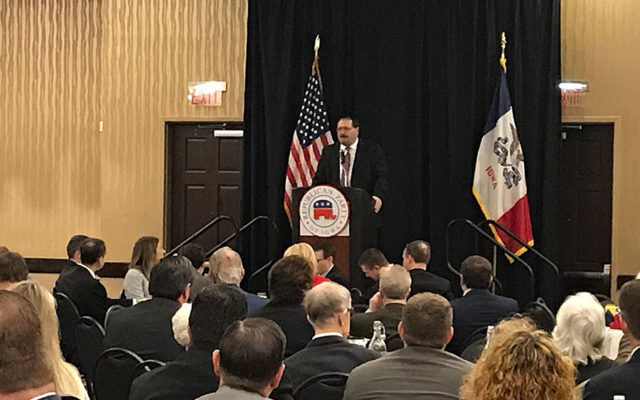 DES MOINES — Three hours before the 2019 Iowa legislative session began, 150 Iowa Republicans gathered in a Des Moines hotel ballroom to celebrate their 2018 election victories and provided some general hints of their agenda for the year ahead.

Jeff Kaufmann , the chairman of the Iowa Republican Party, said Republican Governor Kim Reynolds has a mandate from voters.

“The governor won 88 of 99 counties. That is a statewide referendum, a pat on the back to go get ’em, period!” Kaufmann said to kick-off the event.

Reynolds thanked her fellow Republicans for supporting her “conservative message.”

“We need your continued support as we move into this legislative session,” Reynolds told the crowd.

House Speaker Linda Upmeyer of Clear Lake has been the top Republican in the legislature for the past four years.

“The voters affirmed what we were about, what we did and we’re excited to go forward,” Upmeyer said.

Senate President Charles Schneider, a Republican from West Des Moines, said Republicans aims to limit the size and scale of government and reduce the tax burden.

“Iowans and, really, all Americans want their election officials to lead,” Schneider said. “They want elected officials to think big and pose solutions to critical problems without worrying about political consequences and, most importantly, they want us to follow through on what we said we will do.”

Senate Majority Leader Jack Whitver, a Republican from Ankeny, said the GOP made “big reforms” over the past two years.

“Now it’s time to take the next step forward. We’ll continue our big ideas, our bold action to reduce taxes on hard-working Iowans, continue to build our workforce and continue to build our mental health system,” Whitver said. “There’s a lot of work to do. The voters are expecting us to do big things. We will.”

This morning’s event was a fundraiser for the Iowa Republican Party and it was open to the media. Iowa Democrats held a private fundraiser last night.