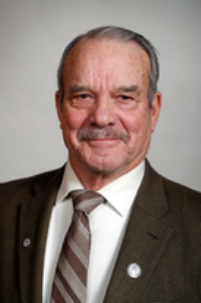 FOREST CITY — State Representative Tedd Gassman announced Thursday night that he’ll not seek another term in the Iowa House. The Scarville Republican was first elected in 2003 to the House District 7 seat that covers Winnebago, Emmet and northern Kossuth counties.

Gassman tells KGLO News that he’s recently been dealing with spinal stenosis, a common condition that causes a pinching of the spinal cord and nerve roots.  “It’s where that nerve comes out, then the sciatic nerve and goes down your legs, and that’s the one that’s getting cut off from the pressure of when I stand then, my body weight on that nerve, then that cuts off communication through the nerve, and that’s when it gets to hurting, then I just got to sit down for a while. If I sit down for a while, I can go again for a while, it seems to clear up, but I guess what concerns me is how long will it be if I don’t do something different.”

Gassman says it was a tough decision to not seek re-election. “I like what I’m doing and I think I have taken some very good votes down there, and I just assumed stick with it. If I don’t sit for a while every once in awhile, my back when he gets to hurting, and that’s no fun either. I’m going to look into this a little bit more now and see if what I can do.”

Gassman says there’s been some very important legislation that has passed the legislature during his tenure, including this year’s vote to restructure the Judicial Nominating Commission. “This law that we passed last spring on the selection of our judicial commission I think was a very good vote. To me, it had gotten out of hand. We needed a change. In my opinion, it was an oligarchy that we have gotten ourselves into. This was law by judges, and that isn’t that isn’t the way we’re supposed to be doing as far as I’m concerned.”

Gassman beat incumbent John Wittneben of Estherville by 44 votes to win the District 7 seat in the 2012 election. He won re-election three times, beating Dave Grussing of Armstrong in 2014 and 2016, and Debra Jensen of Forest City in 2018.