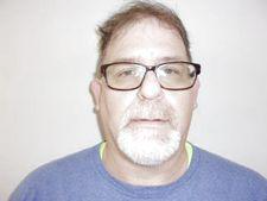 GARNER — A Garner man has been sentenced to 25 years in prison on methamphetamine dealing charges.

52-year-old Jeffrey Reichardt was accused of bringing meth into the area about every two weeks between May 2020 and February of this year to sell to individuals.

During a traffic stop on February 2nd, a search of his vehicle produced just over one ounce of meth and a glass pipe used for smoking meth, as well as a gram of marijuana inside a pants pocket.