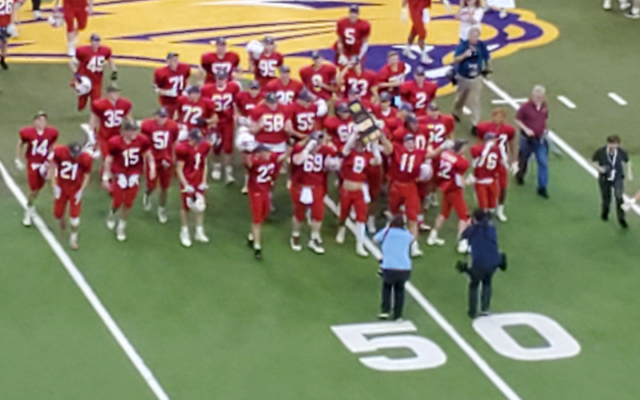 CEDAR FALLS — West Hancock held off two late Grundy Center drives in the fourth quarter to win their second championship in three years and third championship overall as the Eagles beat the Spartans 19-14 in the Class A state title game at the UNI-Dome in Cedar Falls on Thursday, as you heard on AM-1300 KGLO and kgloam.com. Grundy Center took over inside the 25 after a West Hancock fumble midway through the fourth quarter and couldn’t score, and then Grundy Center’s final drive of the game came up short as time ran out on the Spartans at the Eagles 9 yard line. West Hancock coach Mark Sanger talks about his team bending but not breaking in the final two defensive stands.

West Hancock finished a perfect 13-0 and Sanger credits the leadership of the seniors on that accomplishment.

West Hancock beat Grundy Center in the 2019 title game, with the Spartans beating the Eagles in the 2020 quarterfinals. Sanger says it was another classic battle between the two programs on Thursday.

Matthew Francis had 119 yards rushing and a touchdown, Braden Walk ran for 67 yards and a touchdown and Rylan Barnes got a 34-yard touchdown pass from Mitchell Smith to lead West Hancock. Grundy Center ends the year with an 11-2 record. You can hear Sanger’s full comments with reporters below

IOWA CITY — Iowa connected on a school record 20 three pointers and raced by Alabama State 108-82. Jordan Bohannon was four of eight from behind the arc as he became the Big Ten’s all time leader in three pointers.

Bohannon on the record.

Keegan Murray had 26 points as the Hawks improve to 4-0 but Bohannon knows the schedule gets much more difficult soon.

CLEAR LAKE — Clear Lake is ranked 5th in Class 3A in the preseason girls basketball rankings released on Thursday by the Iowa Girls High School Athletic Union. The Lions were 19-2 and finished in the semifinals of the state tournament last season. Clear Lake coach Bart Smith says the senior leadership of Jaden Ainley and Emily Theiss will be a key this season.

Smith says he’s been pleased with the progress of his team in the opening weeks of practice.

Looking at the rest of the rankings, local teams rated include Mason City High being 11th in Class 4A, West Hancock 9th and West Fork 12th in Class 2A, and Bishop Garrigan 2nd and St. Ansgar 11th in Class 1A. You can see the full rankings by clicking here

CLEAR LAKE — Clear Lake’s Emily Theiss signed a national letter of intent on Thursday to continue her basketball career at Iowa Central Community College. Theiss says she liked the size of the college and feels she’ll fit in well with the program.

Theiss in her junior season averaged 8.7 points per game as the Lions were 19-2 and made the semifinals of the Class 3A state tournament.