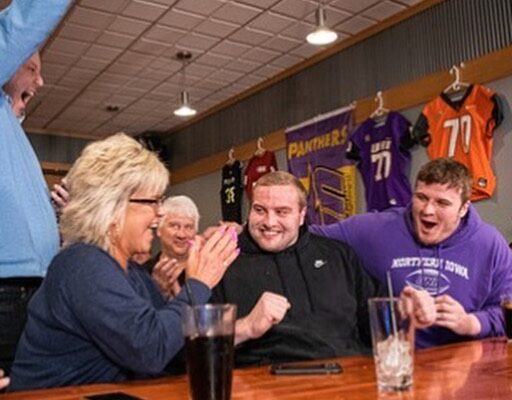 CLEAR LAKE — Offensive tackle Trevor Penning became the first University of Northern Iowa player selected in the first round of the NFL Draft after being taken by the New Orleans Saints with the 19th pick. The Newman alum joined family and friends at a watch party in Clear Lake on Thursday. Click on the audio player below to listen to our interview with Penning.

LAS VEGAS — University of Iowa center Tyler Linderbaum was selected by the Baltimore Ravens in the first round of Thursday’s NFL Draft. Linderbaum was the 25th player picked overall. He is the 19th offensive lineman selected in the Kirk Ferentz era and fourth center. Linderbaum (6-foot-3, 290-pounds) is a native of Solon, Iowa. He earned unanimous consensus All-America honors, becoming the 12th Hawkeye to earn that distinction. Linderbaum became Iowa’s first recipient of the Rimington Trophy. He was also named the Rimington-Pace Big Ten Conference Offensive Lineman of the Year while earning first-team All-Big Ten honors for the second straight season.

EAGAN, Minn. (AP) — The Minnesota Vikings have selected Georgia safety Lewis Cine in the first round of the NFL draft. They had the No. 12 pick and packaged it in a trade with a division opponent to move down 20 spots. The Vikings sent the 12th overall selection and pick No. 46 to Detroit for the 32nd, 34th and 66th selections. The net result of the 20-spot slide in the first round for the Vikings was an early third-rounder and a 12-spot jump in the second round. This is the first draft for new general manager Kwesi Adofo-Mensah.

MINNEAPOLIS (AP) — Carlos Correa broke out of a slump with three hits and three RBIs and the Minnesota Twins completed a three-game sweep of the Detroit Tigers with a 7-1 victory on Thursday. Gio Urshela, Trevor Larnach, and Gilbert Celestino each had two hits for the Twins. Minnesota has won seven straight and finished off a 6-0 homestand that also included a sweep of the White Sox. Correa entered the game on an 0-for-10 skid that had dropped his batting average to .167. He came through with a two-run double in the fifth, an RBI single in the sixth and another single in the eighth.

ST. PAUL, Minn. (AP) — Kirill Kaprizov scored a power play goal 44 seconds into overtime to give the Minnesota Wild a 3-2 victory over the Calgary Flames.With the victory, the Wild take over sole possession of second place in the Central Division. Minnesota leads St. Louis by two points with each team having one game remaining on Friday. Cam Talbot, starting in net for the first time in a week, stopped 31 of 33 shots.Johnny Gaudreau scored his 40th goal of the season for the Flames, who have first place in the Pacific Division. Nikita Zadorov also scored for the Flames and Jacob Markstrom made 22 saves.