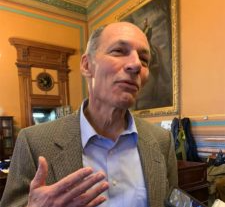 Franken says he’s appealing to independents and Republicans as well as Democrats who believe Grassley’s 63 years in office is enough. “If we want a different direction for the state of Iowa, if we want a clean thought process, a place where America looks in the mirror and feels good about itself, and where economically, scholastically, quality of life, healthcare are of high importance to you, give me a look.”

Franken suggests having former President Trump campaign for Grassley last Thursday was an act of desperation. “He comes and spews a pro-Donald Trump message with little support for Iowa as it exists today, and in my hometown in Sioux City. My sense is, and the phone calls I got flooded with Sioux Citians afterwards saying ‘OMG, save us from ourselves’, and I’m not that type of savior, but I’m a steady hand on the tiller, and hopefully we get this ship of state back on course.”

A Des Moines Register “Iowa Poll” released over the weekend shows the Republican Grassley now with a 12 point lead over Franken heading into the election.