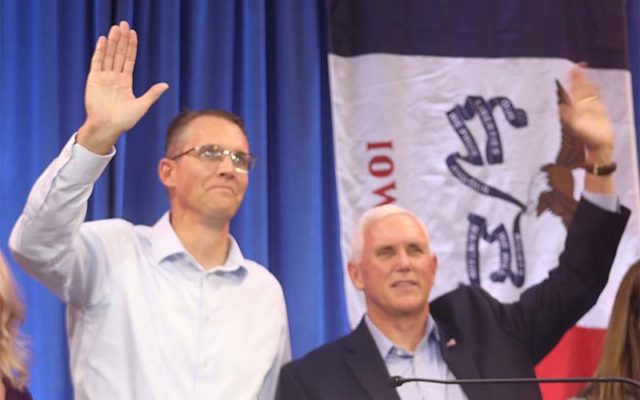 SIOUX CENTER — Former Vice President Mike Pence says the time has come for Republicans to push back against Democrats in control of congress and the White House.

Pence was the keynote speaker at Congressman Randy Feenstra’s Friday fundraiser in Sioux Center. “I came here to say ‘Enough is enough!'” Pence said, to applause and cheers.

Pence suggests the G-O-P formula for 2022 and 2024 is to cite the record of the Trump-Pence Administration.  “I think what we demonstrated under the leadershp of President Donald Trump was what you can accomplish if you stand firm and don’t back down for conservative principles,” Pence said, to applause. “It’s incredible.”

Pence, asked by Trump to lead the administration’s pandemic response, touted the outcome of Operation Warp Speed.  “On the day we left office, we were vaccinating one million Americans a day,” Pence said. “I’ll always be proud of the way the American people responded over the course of the last year and a half with courage and compassion…I will always be grateful for the doctors and nurses and health care workers and first responders that saw our nation through this trial.”

The event was a fundraiser for Feenstra’s bid for a second term in the U.S. House and Feenstra introduced Pence to the crowd as a great friend.  “And he stood by President Trump, secured the border, grew our economy and did so many great things for our country,” Feenstra said.

Pence was also the closing speaker at The Family Leader’s day-long summit in Des Moines on Friday.