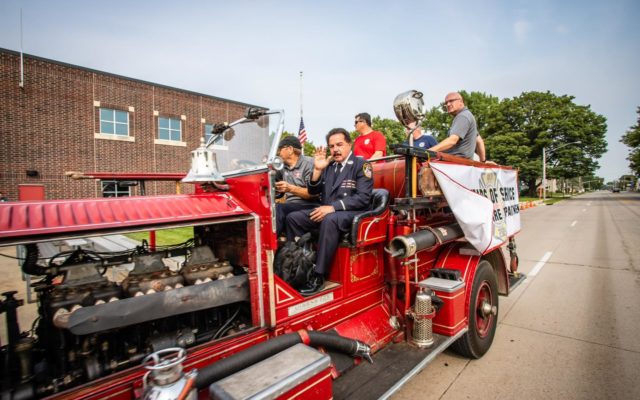 CLEAR LAKE — A retired lieutenant of the Fire Department of New York who was trapped twice inside the World Trade Center was the keynote speaker for Saturday night’s September 11th attacks remembrance ceremony at the Clear Lake Fire Department.

Joe Torrillo was forced to retire in 2004 due to a brain injury and says while he was disappointed that his career as a firefighter was over,  he wanted to help build patriotism in America.  “I wanted to be happy again. I wasn’t being selfish, but I wasn’t happy anymore. I promised myself that I would spend the rest of my life making our country the ‘Reunited States of America’. Going across the country, resurrecting patriotism and keeping the memory alive of all the victims who died and those who gave their lives in the greatest rescue effort that was ever witnessed by anybody on earth.”

Torrillo says he can’t understand what has happened in the 20 years since 9-11 with patriotism in the United States.  “We had a huge resurrection of patriotism right after 9-11, but it started dying. I understand maybe, the people, they were forgetting, so they didn’t feel the need or the purpose of being overly patriotic. I think in the 20 years, with all the political strife that’s going on in Washington DC, with all these movements that are going on, I think some people are polarizing, and now we’ve become like a split nation. We’re not the Reunited States of America, we’re the Divided States of America. It all has to do with the political machine.”

Torrillo says he wants to make sure the memory of what happened on 9-11 never fades away.  “My biggest fear is this is going to become the next Pearl Harbor. This December 7th, I guarantee you the newspapers won’t say a word about Pearl Harbor. I’m afraid that one day that’s what’s going to happen with 9-11. Everybody like me will have passed on, and the younger generation might not feel that obligation to keep it alive. That’s why I feel so strongly, every year we do have to have ceremonies so we expose the younger kids to what we’re doing, and then hopefully they’ll feel motivated and inspired to keep on doing this for us.”

Torrillo had moved from being an active firefighter to the department’s fire safety education office in 1997 and was on his way to a press conference at the Fisher-Price headquarters in the World Trade Center when he diverted to his old fire company headquarters across the street to assist after the first plane hit.

While he was involved in the rescue operation, the south tower fell, burying alive Torrillo with a fractured skull, broken ribs, broken arm, crushed spine and heavy bleeding. After finding Torrillo, he was removed from the rubble and was being treated when the north tower collapsed, burying him alive again.

You can hear our interview with Torrillo and see his presentation from Saturday night’s ceremony below.