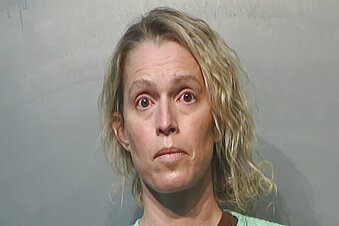 This Jan. 21, 2021, photo provided by the Polk County Jail in Des Moines, Iowa shows Jennifer Woodley. Former Make-A-Wish Iowa CEO Jennifer Woodley is charged with first-degree theft and unauthorized use of a credit card. The organization announced last summer that she had been terminated as CEO after it discovered financial irregularities during a compliance review. (Polk County Jail via AP)

DES MOINES, Iowa (AP) — The former CEO of Make-A-Wish Iowa has pleaded guilty to charges of embezzling tens of thousands of dollars from the charity that supports sick children and their families.

Jennifer Woodley admitted in a written guilty plea last week that she made unauthorized charges on a foundation credit card, gave herself unapproved bonus and salary increases and made false entries in foundation records. The 40-year-old pleaded guilty to two counts of first-degree theft and one count of fraudulent practices.

Under a plea agreement, prosecutors will recommend a sentence of five years of probation, along with fines and restitution.

A charging document alleged that Woodley’s embezzlement totaled nearly $41,000, but the amount of restitution has not yet been set.