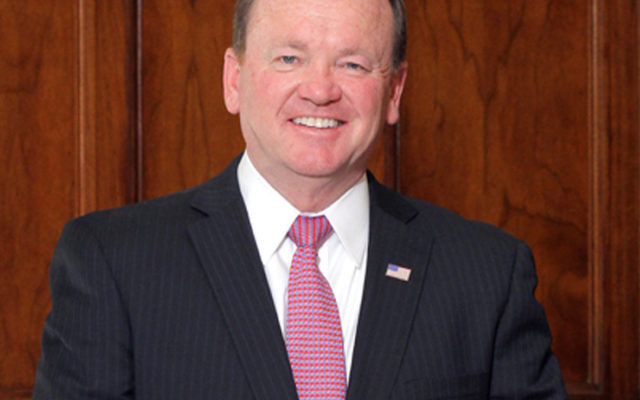 MASON CITY — The former Sheriff of Los Angeles County was in Mason City on Monday to talk about the challenges facing law enforcement around the country.

Jim McDonnell began his law enforcement career in 1981, serving 29 years with the Los Angeles Police Department. He served five years as the Long Beach Police Chief before being elected in 2014 as the first Sheriff in 100 years to be elected from outside the LA Sheriff’s Department.

McDonnell says one of the big issues being dealt with by law enforcement is dealing with people in a mental health crisis and he feels Southern California can share some ideas on how to address that. “And we’re seeing that with greater and greater frequency, both in the street and in the custody environment. It’s a real challenge, you know, police officers deputy sheriff’s are not trained psychologist or psychiatrists. They do the very best job they can with the training they have, but it’s a very challenging situation that we insert them into on a regular basis. To be able to pair up a mental health clinician with the deputy or an officer, we get tremendous return-on-investment on doing those things. We’ve done those in California for a number of years, we dramatically expanded that recently.”

McDonnell says social media has made a big impact on law enforcement’s job.  “Social media, you try and get in front of a story to be able to share what happened you know what this much knowledge as you can. With the public today in today’s environment with social media, you get to a scene, and before you have the yellow tape up, it’s already out there, viral in some cases. A snippet of a piece of what happened, a story is being told, so you have to try and do the best you can to be able to shed light on it and to be able to educate the public as to what actually happened, to the degree that you can in a situation like that.”

McDonnell says it’s a tough time to be in policing and a tough time to be a younger person growing up in America. He says the divisiveness that we see is challenging on all levels.  “We need to work to come together, and what I spoke about this morning to the student group, was each and everyone is a leader and we all have an ability to make an impact beyond ourselves on other people, and to stay positive, to be able to use the values that were instilled in them as young people to be able to guide their life moving forward, and then to be able to share that with as many people as they can. We are all leaders, we all have the ability to be able to truly make a difference.”

McDonnell says police are not going to be effective without the help and support of the community, and community policing will continue to be a critical component of public safety.  “The more that we can talk about why we do, what we do, we can do a better job I think across the board explaining why we do, what we do, or what we did, and from the community standpoint we all have to be in this together. Our communities are only as strong as they are safe. The bottom line is that the government’s primary responsibility is to provide for the safety of people who live in that community, so by working together we get tremendous return on investment. By trying to do it alone or trying to demonize any part of the community, including the police, we’re missing the boat on what we could be as a community.”

McDonnell spoke to students throughout the day Monday at North Iowa Area Community College and held an open lecture on Monday afternoon.