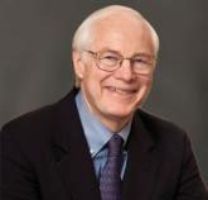 He says people may be right that there are a lot of problems going on in Washington, but there’s some very fine governance going on in the state of Iowa.  “For example, the county government in Iowa is incredibly impressive with reasonable people making reasonable judgments based on constrained  resources. If you look at the Iowa courts, the state of Iowa has the most progressive court in the United States history. All sorts of rulings on civil rights for example, the Iowa Supreme Court ruled on constructively over a century before The Supreme Court of the United States. This is a state that’s always had a first class legislature, first class governors, first class judges.”

Leach says the current era isn’t the first time that the United States has seen a large political divide. He says there were a lot of questions in the 1930s when a lot of people turned to a different extreme left and right.  “We had in this country in the 1930’s, in the academy particularly in the arts particularly, groups of Americans that identified with communism. Now it was a misled communism, it wasn’t Stalinism, it was a theoretical communism. We also had a group of Americans that were part of what was called the “America First” movement. It included people like Charles Lindbergh, it included people like Joseph P Kennedy,  and it was pro-Nazi. That’s an extraordinary phenomenon in this country. So we have these issues that have occurred in odd ways and at odd times, and we have to deal with it.”

Leach says one of the most remarkable aspects of American politics today is the extraordinary fact that over the last couple of generations, the majority of Americans could be typed as “center right” and “center left”, but Congress has shifted to further extremes.  “Today in the United States Congress, I would suggest that maybe 34-35% of the Congress could be defined as “center-left” or “center-right”. The center of America no longer is represented in your Congress, although it is very much alive and much of the American public, but it isn’t alive in Congress, where the Republican Party has moved to the right, the Democratic Party has substantially remained or moved a bit to the left. But this is a very unusual setting for America and in many ways unprecedented.”

Leach served eastern Iowa in the US House from 1977 to 2007 and currently is a visiting professor of law at The University of Iowa.

You can listen to Leach’s presentation from last night via the audio player below, where you may also download it to your device for later listening