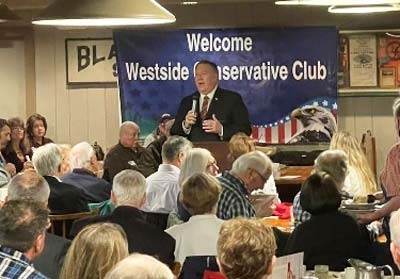 SIOUX CITY — The only person in US history to serve as secretary of state and head the CIA was the keynote speaker at the 36th annual Siouxland Chamber of Commerce dinner.

Mike Pompeo gave his views about how America’s is looked at by the rest of the world. “I take no joy in saying that over the last now 20 months, America’s role in the world has been diminished that our adversaries fear us less. Think Vladimir Putin’s invasion of Europe, think the fact that the Chinese are now dropping missiles off the coast of Taiwan — our adversary spirits less and our friends trust us less. That’s a bad place to put the American people,” Pompeo says.

Building security was tight as the former secretary has received death threats from Iran, which he referred to in his comments. “I watched as the administration is negotiating with the Iranians, while the Iranians are trying to kill senior, former government officials. And while the Iranians are engaged in terror all around the world while they’re killing their own, our friends in the Middle East, who joined with us to protect Israel and build out what became the Abraham Accords, they are hedging their bets,” Pompeo says. “These are nations that are now reestablishing their ties to Iran, their diplomatic ties, they’re building commercial relationships, in ways with an adversary that wants to destroy our nation and Israel.”

Pompeo also says Vladimir Putin’s invasion of Ukraine started while Joe Biden was Vice President. “This conflict in Europe did not begin in February of this year, Putin invaded Ukraine in 2015 and took 20 percent of that country under President Obama. Failed American leadership, failure to deter, and put 20 percent of Ukrainian real estate in the control of the Russians,” he says. “For four years Vladimir Putin did not take any further real estate in Europe. And as soon as we left, within months, he began to plan and plot and build out his forces by the fall of 2021 had made the decision to invade Europe yet again.”

He also addressed the border crisis — warning that a number of people who are security threats are likely entering the country. “Four-point-two-million illegal entries in less than 20 months. Kansas my home state three-point-two million people. Think about the math on that for just a second. More people by almost a third than the entire State of Kansas have entered our border illegal in just 20 months. That is dangerous for America,” Pompeo says.

The former Kansas Congressman says he will remain in the fight — but says it is too early to tell what his position will be. The event was held last Thursday.