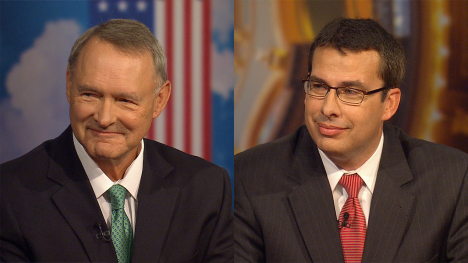 JOHNSTON — The Republican candidate for state treasurer says if elected, he’ll be an advocate for more state tax cuts. Republican Roby Smith of Davenport has served in the state senate for the past 12 years.

The Democratic incumbent says his responsibility as state treasurer is managing the state’s money and keeping it safe. Democrat Michael Fitzgerald has been state treasurer since 1983.

“Now if the legislators and the governor want to increase taxes or decrease taxes, that’s their decision,” Fitzgerald says. “It’s not something that directly affects programs we run in the state treasurer’s office.”

Smith is accusing Fitzgerald of mismanaging “College Savings Iowa” — a so-called 529 program which lets parents and grandparents set aside money tax-free for a child’s education. Smith cites a recent report from an agency that rates investments like mutual funds.

“Morningstar rating agency out of Chicago rated the 529s all throughout the country and Iowa’s was downgraded. It was downgraded from a C to a D,” Smith says. “It is one step away from failing.”

“Our program has been solid for 24 years,” Fitzgerald says. “We explained it to them just a couple of weeks ago. I think you’re going to see an upgrade in another couple of weeks.”

The candidates made their comments during the “Iowa Press” program which aired over the weekend on Iowa P-B-S.