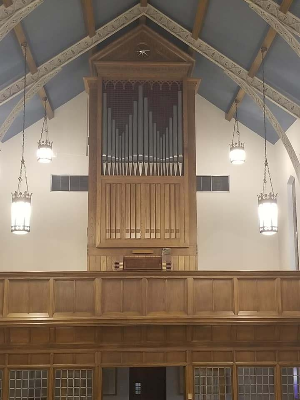 A Dobson organ that was moved from Pella to Fort Wayne, Indiana

LAKE CITY — A fire has destroyed the Dobson Pipe Organ Builders workshop in Lake City. A company statement on Facebook says an employee who discovered the fire and tried to put it out was burned, but “he is “expected to make a full recovery.

Dobson, founded in 1974, has grown to have an international customer base and was building a pipe organ for a historic church in Sydney, Australia. According to the company’s website its workshop in Lake City was originally built in 1898 and had been damaged by fire in the 1970s.

The Dobson company currently maintains about 120 organs in the Midwest. New Dobson pipe organs were just installed at the University of Dubuque and a church in Massachusetts.