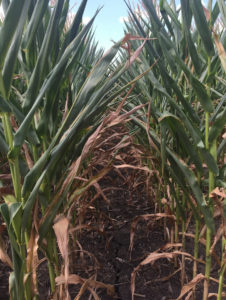 AMES — Producers are strategizing for harvest as drought can slow corn’s conversion of nitrates to essential proteins, making it potentially toxic to animals that eat corn silage or stalks.

“When we’re harvesting that silage, one thing we want to do is to make sure we don’t cut it or harvest it immediately after a rain,” Clark says. “Nitrates are water soluble and often you see quite an influx of water and nitrates into the plant after a rain.”

Clark says there’s a lot more nitrates in the lower part of the cornstalk, so he recommends producers raise their choppers and leave at least a foot of the corn stalk in the field. “When you do that, you’ll get lesser yield but actually greater nutritional value on a percentage basis,” Clark says, “because we’re leaving the more un-digestible part of the plant unharvested.”

Clark recommends testing for nitrates and harvesting drought-impacted corn as corn silage instead of grain because that’ll take more nitrates out.