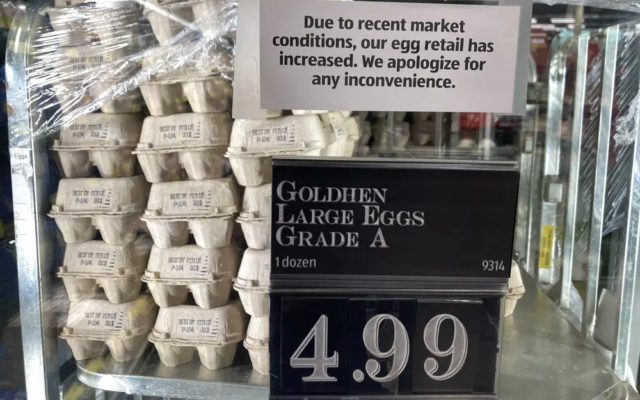 Eggs now average more than $4 a dozen nationally. Iowa reflects the trend, where a dozen eggs cost more than two-and-a-half times what they did a year ago.

The U.S. Department of Agriculture has blamed a deadly avian flu outbreak and supply-chain problems for the egg shortage and sharp price hikes. But the rural advocacy group Farm Action contends its research proves those factors are not to blame.

“We saw nothing that justified these egg prices, these price hikes,” Laninga stressed. “They are up 138% since last year. That’s more than double. Meanwhile, companies that haven’t reported a single case of avian flu are raking in record profits, reaching as high as 40% in some cases.”

In its letter to the commission, Farm Action called on chairperson Lina Khan to investigate, prosecute any violations of antitrust law and ultimately, “get the American people their money back.”

Iowa is the top egg-producing state in the nation, according to United Egg Producers.

Some egg producers have said the avian flu outbreak has made it difficult to get new laying hens. Inflation and supply-chain issues are also being blamed. But Laninga countered such factors do not justify the dramatic price increases.

“They blame a supply-chain disruption, but we don’t actually, when we take a closer look, see any supply-chain issue that would justify the price hikes,” Laninga asserted. “The avian flu outbreak does not explain it. The average flock sizes in 2022 never dropped more than 6% to 8% from previous year’s levels.”

So far, the commission has declined to comment, and the USDA reports egg prices are down slightly nationwide.