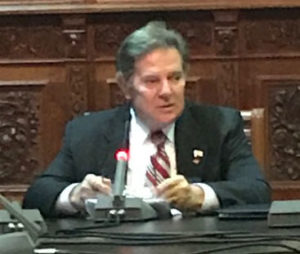 DES MOINES — Former Texas Congressman Tom Delay, the former majority leader in the U.S. House of Representatives, was among the speakers at a hearing in the Iowa Capitol last night.

Delay is now part of a coalition of 120 groups pressing for bills — like the one pending in the Iowa House — that would ban abortion after a fetal heartbeat is detected.

“I am very proud of Iowa taking the lead on passing a heartbeat bill because it is time,” Delay said. “Ladies and gentlemen, it has been 45 years…Something has to change.”

Delay is an opponent of the 1973 Roe v Wade decision that legalized abortion and he told Iowa legislators public attitudes are changing because of what people can see on a sonogram. 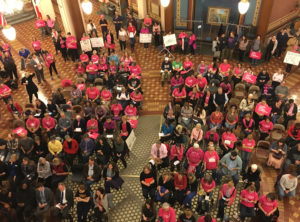 People lined up outside the hearing.

Delay spoke briefly with Radio Iowa after the hearing, suggesting his travels to Iowa and other states are a bit of penance for inaction during his 15 years in congress.

“I regretted all this time that I was in congress and, frankly, had the strength of power, that I didn’t get rid of abortion,” said Delay, who resigned from congress in 2005 after being accused of campaign finance irregularities.

“We are once again being forced to plea for women’s basic reproductive rights,” de Baca said. “How insulting for women who remember what life was like before Roe w Wade.”

According to de Baca, before 1973, one in six deaths among pregnant women “were the result of an illegal abortion.”

“If you advance this legislation, Iowa will be dragged back into the back alley days,” de Baca said.

De Baca and others were cheered by a large contingent gathered outside the hearing room, watching the hearing on a large monitor. Dr. Amy Bingaman, an obstetrician and gynecologist in Des Moines, called the six-week abortion ban an attempt to insert politics into the practice of medicine

“I am fighting for my patients, your wives, your sisters, your children,” she said.

The Iowa Senate passed a six-week abortion ban at the end of February. A similar ban is attached to another abortion-related proposal and is now eligible for debate in the full House.