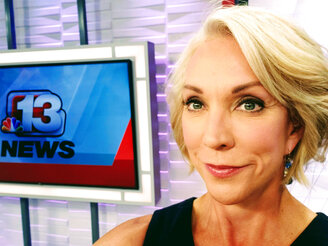 Sonya Heitshusen is pictured on July 29, 2020, in Des Moines, Iowa, on one of her last days as a reporter and anchor for WHO-TV, an NBC affiliate. Heitshusen, 54, filed a lawsuit on Tuesday, Aug. 24, 2021, against the station's parent company, Nexstar Media Group, Inc., alleging she was removed from the air because of her age and gender. (Photo courtesy Sonya Heitshusen via AP)

DES MOINES, Iowa (AP) — A once-prominent anchor at one of Iowa’s biggest local television stations has filed a lawsuit alleging she was let go last year because of her gender and age.

The lawsuit alleges that Heitshusen was “thrown out to pasture” after she turned 53 because she was no longer seen as camera-worthy, after enduring years in which her older male colleagues received better pay and working conditions.

Heitshusen says she hopes her lawsuit encourages a “cultural shift” in the TV news industry.

Nexstar has called Heitshusen’s firing a reduction in force.