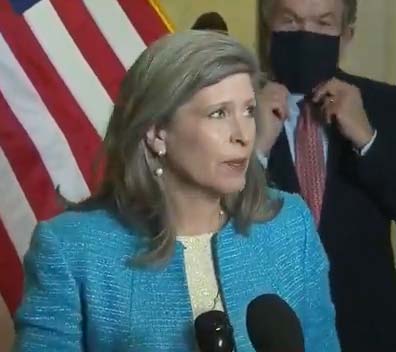 WASHINGTON — Republican Senator Joni Ernst is again raising questions about previous federal funding for a U.S.-based organization that wound up supporting research at the Wuhan Institute of Virology in China.

“We need a full accounting of how and where our tax dollars are being spent,” Ernst says. “Enough is enough.”

In late October, the National Institutes of Health called on the non-profit EcoHealth Alliance to provide the data from unpublished research about mice in the Wuhan lab that got sick from a strain of the coronavirus, but U.S. officials say that strain is not closely connected to Covid-19. Ernst says the agency and Dr. Anthony Fauci, it’s most recognized employee, had a legal obligation to know how U.S. grant money was being spent.

“We’re learning more and more not only about the possible origins of Covid-19, but about our own government’s involvement in dangerous scientific experiments overseas,” Ernst says, “includng at the now infamous Wuhan Institute of Virology in communist China.”

In June, Ernst sought to ban direct or indirect federal funding on any research in China. This week, Ernst is introducing a ban on federal funding for the U.S.-based EcoHealth Alliance that worked with the Wuhan lab.

“We should not be funding dangerous experiments overseas, especially in one of the world’s most closed societies ruled by a ruthless authoritarian regime,” Ernst says, “with no tolerance for truth or transparency.”

The EcoHealth Alliance said last month it was working with the National Institutes of Health to address what it called “misconceptions” about its support of coronavirus research in China. Ernst says the non-profit has not responded to her requests for information and she may call for a subpoena to get more information from EcoHealth.